In Washington D.C. last week, a former Army general told a Senate committee that the U.S. military is being distracted and soldiers are being put at risk because the Department of Defense (DoD) has become “an unwitting agent for propagandizing the dangers of climate change.”

The officer was retired Maj. Gen. Robert Scales, an expert on land warfare and the former Commandant of the United States Army War College. He testified before the Senate Committee on Environment and Public Works, chaired by Congress’s foremost climate skeptic, Republican Jim Inhofe of Oklahoma.

Meanwhile, 200 miles to the south, the nation’s largest naval base – Naval Station Norfolk, home of the Atlantic fleet – was at risk of increased flooding. The base and the city of Norfolk are experiencing larger and more frequent floods these days as a result of their low elevation, natural ground subsidence, and rising sea levels attributed to global warming. 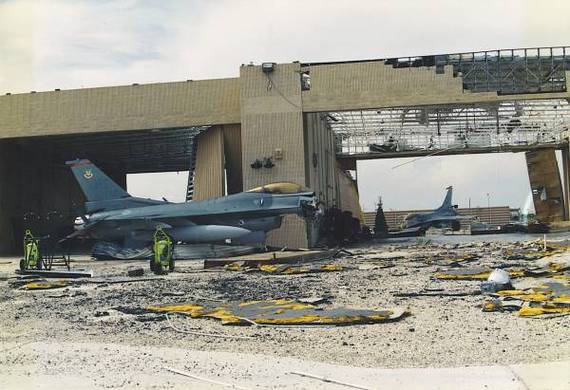 Homestead Air Force Base in 1992 after Hurricane Andrew hit Florida.

The Norfolk naval station is not the only military asset at risk from climate change. There are more than 700 military installations and sites located on America’s coasts. DoD has 7,600 installations across the 50 states and in 40 foreign nations. Its global real estate portfolio includes more than 555,000 facilities and 28 million acres of land with a replacement value close to $850 billion. In 2008, the National Intelligence Council identified 30 U.S. military installations already facing higher risks from rising sea levels. In 2014, the U.S. Government Accountability Office (GAO) confirmed that climate change already is adversely affecting military installations. The author of the report concluded “theoretically, any one of them or all of them are vulnerable to climate change.”

A few lines down, I’ll quote some of the numerous studies that describe how climate change threatens international stability as well as U.S. military capabilities and budgets. Adverse climate impacts are modeled and forecast by scientists, but it is the military and intelligence communities that must try to mitigate them. The military’s job is to foresee and prepare for threats to national security long before they arrive. Toward that end, climate-related risk assessments and directives have been incorporated into the White House National Security Strategy, the Department of Homeland Security’s climate action plan, the findings of the National Intelligence Council, the Department of Defense Quadrennial Defense Review and DoD’s latest climate adaptation roadmap, to name just a few.

Gen. Scales dismisses these assessments, arguing that the Pentagon is merely following the script of its Commander in Chief in the White House. Further, he believes the script itself creates risks for the military.

“In its zeal to follow orders the military might deflect resources away from fighting the war against global terrorism to fight a contrived war against global warming,” he testified. “Every dollar spent on initiatives that don’t apply directly to fighting the enemy and keeping our soldiers and Marines safe on the battlefield is a dollar needlessly wasted. Again, no soldier should die in battle for the sake of political correctness.”

He continued: “Think of a soldier in Afghanistan or Iraq returning from a dangerous and exhausting mission being obliged to listen to a senior defense official lecture them on the revelation that fighting climate change is their most important mission. These men and women see the realities of battle all around them. The military threat of rising temperatures is not one of them.”

There are several flaws in Scales’ arguments. Many of the warnings about the risks of climate change are coming not from the Pentagon, but from retired military and intelligence officers who are no longer in the chain of command. They are under no obligation to stick to a White House script. On the contrary, they usually are as blunt as Scales in their views about national security.

Gen. Scales does not speak for the veterans of the Afghanistan and Iraq wars. Returning vets have joined campaigns to tell the American people about the risks of climate change and fossil fuels. In 2009, for example, a coalition of veterans and national security organizations founded Operation Free to raise public awareness about the national security threats of climate change and the nation’s dependence on oil.

As of a year ago, 17,000 veterans were employed in the solar energy industry thanks in part to a training program conducted by the U.S. Department of Energy. Those numbers are likely to increase as more military personnel become familiar with the renewable and clean energy technologies being deployed by the armed services and in the civilian economy.

Scales is wrong, too, about the value of the Pentagon’s investments in climate change adaptation and mitigation. The investments improve rather than undermine the military’s war-fighting abilities and the safety of our soldiers.

A prominent example is the use of renewable energy technologies to generate electricity for soldiers in the field rather than relying on generators run on diesel fuel. The convoys that deliver diesel are as vulnerable as they are vital. DoD reports that 3,000 Americans were killed in fuel convoys in Iraq and Afghanistan between 2003 and 2007 alone.

At home, the growing use of renewable power at military bases allows them to keep operating even when the aging civilian grid goes down. Third parties rather than taxpayers finance many of these technologies. And renewable energy saves money that can be applied to other essential purposes. Studies have shown that by the time petroleum reaches soldiers in the field, it can cost as much as $45 per gallon.

Retired senior military and intelligence experts have sounded blunt warnings about the security risks of climate change for years. Similar warnings have been published by civilian organizations such as the Council on Foreign Relations, theCNA Military Advisory Board, and the Center for Climate and Security, a policy institute with an advisory board of senior retired military and national security experts.

These distinguished Americans, many of whom spent their careers in service to national security, understand that climate change is arguably the most insidious of all threats to our future, including terrorism. That’s the case because some of its most damaging impacts will be irreversible if they are not addressed now. The military and intelligence communities can do something about Isis and Al-Qaida. They cannot protect us from rising seas, more violent storms, record droughts, spreading diseases and other long-term consequences of carbon pollution.

The real forward forces in the war against climate change are in the White House, Congress, statehouses, state legislators and city halls. We all have a role in reducing climate impacts, but we cannot succeed without the help of enlightened and prudent public policies like carbon pricing and the cessation of carbon subsidies. Without those policies, today’s children are being conscripted into a world far more violent and unstable than it is today.

But rather than searching for common ground on solutions, we have prominent political leaders still engaging in a war of words. When outgoing Secretary of Defense Chuck Hagel called climate change a “threat multiplier”, the Wall Street Journal editorial board responded with, “Americans who might die at the hands of the Islamic State won’t care that Mr. Hagel is mobilizing against melting glaciers.” When Secretary of State John Kerry called climate change a potential “weapon of mass destruction”, Newt Gingrich called him delusional and encouraged the American people to demand his resignation.

Americans at the grass roots understand how ridiculous this is. Last October, the World Resources Institute hosted a “Rising Tides Summit“ attended by 40 local elected officials who represented 18 of the nation’s 23 coastal states. Republican as well as Democrat leaders attended to discuss their growing risks from coastal flooding and sea level rise. According to WRI, they reached a unified message that these threats already are present; that they are an economic issue as well as a safety issue; and that presidential candidates need to pay attention. They also agreed that sea level rise and coastal flooding should not be made partisan issues. As one of them put it, “The water coming in your neighbor’s door does not care if you’re a Republican or a Democrat.”

Former generals and admirals have tough words for those who try to make climate change a wedge issue. Members of the Military Advisory Board at the Center for Naval Analysis write, “We are dismayed that discussions of climate change have become so polarizing and have receded from the arena of informed public discourse and debate. Political posturing and budgetary woes cannot be allowed to inhibit discussion and debate over what so many believe to be a salient national security concern for our nation.”

The former officers and national leaders advising the American Security Project write, “We live in a time when the threats to our security are as complex and diverse as terrorism, nuclear proliferation, climate change, energy challenges, and our economic wellbeing. Partisan bickering and age-old solutions simply won’t solve our problems. America – and the world – needs an honest dialogue about security that is as robust as it is realistic.”

The retired military leaders advising the Partnership for a Secure America write, “We believe that the United States is being ill-served by the growing partisan divide surrounding its national security and foreign policy… Policy differences must always be debated, but growing partisan bitterness dangerously interferes with substantive discussion of our national security and foreign policy.”

In the final analysis and in the near term, the greatest threat to national security is the politicians who not only refuse to do anything about climate risks, but who also stand in the way of those who want to find solutions.