On February 8th, Ambassador Bill Taylor, Executive Vice President of the U.S. Institute of Peace and former U.S. Ambassador to Ukraine discussed the foreign policy and national security challenges facing the United States in 2017. He highlighted the key foreign policy take-aways from USIP’s Passing the Baton Conference that reviewed the global challenges confronting the U.S during the transition period between outgoing and incoming administrations. 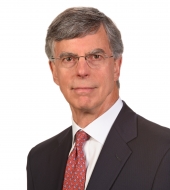 William B. Taylor is the executive vice president at the U.S. Institute of Peace.  Earlier, he was the special coordinator for Middle East Transitions in the U.S. State Department.  He oversaw assistance and support to Egypt, Tunisia, Libya and Syria.  He served as the U.S. ambassador to Ukraine from 2006 to 2009.

He is married with two adult children.

This was the 36th event in the USIP-PSA Congressional Briefing Series – Topics on International Conflict Resolution and Prevention, and educational program designed to provide congressional staff with opportunities to engage leading experts and fellow Capitol Hill staffers in bipartisan forums. The program aims to build cross-party relationships, encourage bipartisan dialogue, and equip staff with new perspectives on critical issues in the international conflict resolution and prevention field.